I was a bit star struck this week, Nikky Smedley who played the Teletubby Laalaa (my favourite childhood TV character) kindly agreed to answer some questions I had about her new book. When I found out that she had written ‘Create, Perform, Teach!‘ I was intrigued as to how she moved from children TV to the education sector. 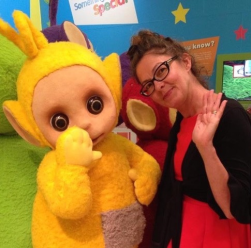 Create, Perform, Teach! is a fantastic book. It helps to inspire early years practitioners to engage children through creativity and performance methods. Nikky Smedley provides practical advice and ideas of how to do this covering everything from puppetry to music and dance!

We loved how easy to read the book was, its range of brilliant ideas and how these ideas will ultimately help children to develop a range of important skills such as speech and language, creativity and gross motor skills.

Here’s my Interview with the Author Nikky Smedley…. 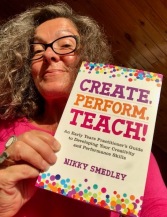 How did you move from children’s television, playing Laalaa in the Teletubbies to the early years sector?

Ragdoll productions who made Teletubbies were always very careful to keep children at the heart of their creative process and had years of experience in studying and interacting with the very young. Through working for the company, I became fascinated firstly with making meaningful communication with and for small children, and then with the broader picture of early years education. After Teletubbies, I continued working for the company, but as part of the creative team rather than as a performer, until eventually I came to realise that the time I spent with the children was the part I enjoyed most and was most interested in. I took some retraining in advanced educational practice whilst also working in schools and nurseries as a freelance creative practitioner and that led on to the work I do today.

Which role (actress or early years practitioner) was the most challenging and why?

They’re both challenging in their own way. Unbelievably to those working in early years, it’s more exhausting being a Teletubby! But on the other hand you don’t have the unpredictability of working with young children. Putting aside the physical demands, I think I’d have to say that it’s easier to be an actress, you are answerable to fewer people and if you make a mistake acting it’s not going to have the potentially serious repercussions of getting things wrong with a child at such a vulnerable age.

Which role was the most rewarding and why?

The trouble with being a Teletubby is that although you know your work is being appreciated by lots and lots of children, you don’t get to see that very often, whereas when you are working face to face with little ones, you are getting immediate feedback, and that is supremely rewarding. However, if ever I was having a bad day in the classroom, that always seemed harder to overcome than on the TV set where you could think – no matter how crummy you were feeling about yourself – “Somewhere in the world a small child is looking at LaaLaa and smiling or laughing out loud,” and that’s pretty hard to beat. It’s still true and I still love that it is.

What skills did you learn in children’s TV which you’ve applied to working in the early years sector?

Well that is really a lot of what the book covers. It may not seem like an immediate match, but it’s surprising how much of a crossover there is. It’s not just in more obvious areas such as storytelling and puppetry, but in the most basic levels of communication that the skills of one discipline become useful in the other. Young children experience the world in a very physical way, with strong visual and aural cues and this holds true whether you are one to one, in front of a group at nursery or behind a screen being broadcast to millions. The fundamentals are completely transferable.

How would you describe your new book?

What made you decide to write it?

Although the book contains lots of activities to try out and case studies for readers to adapt to their own settings, it wasn’t my main aim to just provide things for your children to do. My main focus was the development of the practitioner, to indicate how using the book will not only keep your children occupied in a worthwhile fashion, but will enable you to grow and develop not only as a practitioner but as a creative human being.

What would your advice be to early years practitioners who feel they aren’t very creative? ​

It’s understandable for people to feel that way. Many of us have had our confidence damaged in this area somewhere along the line. But I say NO! Everyone is creative in some shape or form, it’s mostly about giving in, allowing yourself to play and realising that being creative does not mean being able to dance or sing or draw in a way that fits some arbitrary social norm. Being creative is about being able to imagine something that doesn’t currently exist, and to make it so; it’s about being able to solve a problem in an unexpected way; it’s about being flexible and communicative and expressive in a way that’s true to yourself. We are ALL creative and it’s not a competition.

This site uses Akismet to reduce spam. Learn how your comment data is processed.

A lovely mum of an autistic little boy just messaged me on fb to say how much my book is helping her son whilst isolating this week.
Busy writing my second book this morning! Getting to the ‘ahhh I’m so excited to share this book’ stage!!
Discovered a lovely pattern of purchases of my book..more people buy it at the end of the week ready for the weekend! Love that parents are planning play for Saturdays and Sundays!! 🥰
Sooo much fun giggling and chatting to the lovely @nrsaundersbooks this morning for my podcast SEND in the Experts with Georgina Durrant for @twinklsend @twinklresources what a lovely way to finally meet you too Nikki! Also got to meet her dog 🐶!
Loading Comments...
%d bloggers like this: